Dual Language Immersion Programs: What it is and how it works! 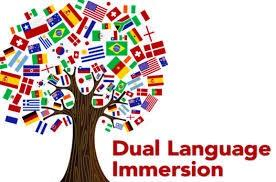 What is Dual Language Immersion?

Dual Language Immersion is a type of program, described by the California Department of Education as an “additive program[s] in that a second language is acquired while maintaining the first language of the students”(CDE).  These programs can be incredibly beneficial; with the most obvious benefit being the acquisition of another language, students also develop an understanding and appreciation for cultures around the globe.  Dual Language Immersion programs typically build on skills and strengths in the student’s native language but incorporate the second language into reading and writing.

In some programs, half of the class will be native English speakers, and the other half will be native speakers of the second language being taught.  This immerses the students in an environment of two languages.  As an example, we can look at the Spanish Dual Immersion Program for Jordan Elementary School in Lowell Joint School District, whose program has a very common structure.  Starting in Kindergarten through 1st grade, students speak 90% of the day in Spanish and 10% in English.  In the following years, the percent of the day spoken in Spanish decreases by 10%, and the percent of the day spoken in English increases.  From 4th-6th grade, the percentages level out, sitting at 50% of the day spoken in Spanish, and the other half spoken in English.  These programs require dedication and diligence from the parents, with students being expected to enroll as early as Kindergarten.  Some cons that parents may want to consider are the contingency of the program impacts.  An example of this could be if the student attends a high school that does not have an immersion program.  Overall, these programs are immediately beneficial for the students.

How many programs are there?

Dual Language Immersion Programs are on the rise in the United States.  As reported most recently by the U.S. Department of Education-American Institutes for Research, 35 states were offering language immersion programs.  The Dual Language Schools website registers 4,866 programs across the country.  The main languages offered in these programs are Spanish and Chinese.  This can be accredited to a large number of Spanish (41 million)  and Chinese (3 million) speaking people in the United States.

Although there are 35 states that have dual language immersion programs, their distribution depends on the policies and availability in each state.  In California, there are over 400 programs at different schools.  We have included a link to the Dual Language Schools website that includes a feature to search for programs across the country by zip code.

Where are they located?

Geographically, these programs are located mainly within the largest cities in each of the 35 states.  It can be seen that there are small groups of programs along the southern border of the United States, in states like California, Arizona, and Texas.  This can be attributed to larger numbers of Spanish speakers in the southern areas of those states.  However, in California, there is a large distribution throughout the larger counties, such as Los Angeles County, San Diego County, and San Francisco County.  The largest groups of immersion programs can be seen in the largest cities within these 35 states.

The Dual Language Immersion programs can be a great and accessible program to students throughout the country.  For students in California, there is a great distribution among the larger cities throughout the state.  Students can enroll in these programs at an early age and begin their journey into learning about the culture and countries that speak different foreign languages.